ECOTRUST with funding from the World Land Trust (WLT) is supporting the establishment of a Corridor Restoration Fund (CRF) to drive the restoration of forest connectivity corridors between the two forest reserve forests of Bugoma and Budongo in the Murchison Landscape of Western Uganda (the Bugoma-Budongo Corridor). The project will cover the 3 districts of Kikuube, Hoima and Masindi in the Albertine Rift that make up the corridor over a period of 3 years. The project will be implemented in a phased approach restoring two critical linkages per year.

The Murchison National Park and the surrounding Northern Albertine Rift landscape are known for their scenic beauty, outstanding biodiversity richness and abundance of natural resources. However, these natural assets are under increasing pressure especially by the new oil developments and the expanding agricultural production. The core protected areas (Bugoma and Budongo Forest Reserves) have lost the connecting natural vegetation that is critical for the long-term survival of wildlife in the corridor. The crisis for biodiversity is severe, especially for the flagship endangered species, the eastern chimpanzee (Pan troglodytes schweinfurthii).

Maintaining the corridor between the Bugoma-Budongo forest reserves is essential for maintaining genetic diversity (Lamprey, 2019). These tropical forests harbor an astounding biodiversity; 52% of Africa’s bird species; 39% of its mammal species; 19% of its amphibians; 14% of its reptiles; and 14% of its plants (Plumptre et al., 2007). This once continuous forest is now reduced and dis-aggregated into large and small forest patches along the length of the Albertine Rift, some established as protected areas, others as fragments on community land.

In this transforming landscape, the crisis for biodiversity is severe, especially for the flagship. endangered species, the eastern chimpanzee (Pan troglodytes schweinfurthii). Uganda’s remaining 5,000 chimpanzees are confined to the forests of the northern Albertine Rift, particularly in Hoima, Kikuube and Masindi Districts (Plumptre et al, 2003). However, a few groups of chimpanzees continue to move through farmlands between forest patches, with some having their entire home ranges in community land (McCarthy et al., 2015

Budongo forest reserve is an international tourist hot spot for habituated chimpanzee tracking. The high season is August to December every year. The forest is located in a moist, semi-deciduous tropical rain forest at the top of the Albertine Rift. The forest is part of the largest wildlife conservation area in Uganda – the Murchison Falls National Park. The area has incredible biodiversity that includes several primate species like Chimpanzees, Blue monkeys, Red-tailed monkeys, Vervet monkeys, black and white colobus monkeys and Olive baboons. The chimpanzee tracking is done in an area called Kaniyo – Pabidi. It is a two to four-hour tacking. However, Budongo forest offers more than Chimpanzee tracking. It is an opportunity for a nature walk, birding and watching the beautiful butterflies that keep beautifying the forest. There are also some famous trees species like Mahogany, Ironwood and other fruit trees in the area.

Overall objective: Secure and restore the connectivity of the wildlife corridor between the Bugoma-Budongo Forest Reserves in Western Uganda to ensure conservation of the rich biodiversity, climate resilience and sustainable livelihoods in the Murchison Landscape.

The project targets three main outcomes that will contribute to the overall goal of securing and restoring the connectivity of the wildlife corridor between the Bugoma-Budongo Forest Reserves to ensure conservation of the rich biodiversity, climate resilience and sustainable livelihoods in the Murchison Landscape. These include:

Develop a 25-year sustainability strategy based on payments for environmental services (PES) incentive model – for all holdings (240,000 trees in 600ha annually) (Phase 1)

Production, provision and planting of 240,000 tree seedlings in the 600ha for all holdings mobilised (Phase 1)

The project will cover the 3 districts of Kikuube, Hoima and Masindi in the Albertine Rift that make up the corridor over a period of 3 years.

The project will cover the 3 districts of Kikuube, Hoima and Masindi in the Albertine Rift that make up the corridor over a period of 3 years. The project will be implemented in a phased approach restoring two critical linkages per year. The prioritisation is based on the availability of resources and the duration of time necessary 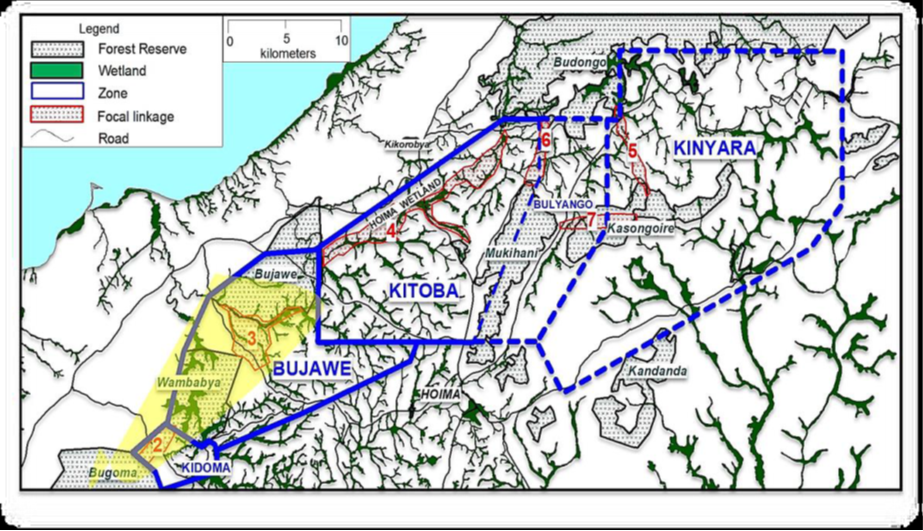 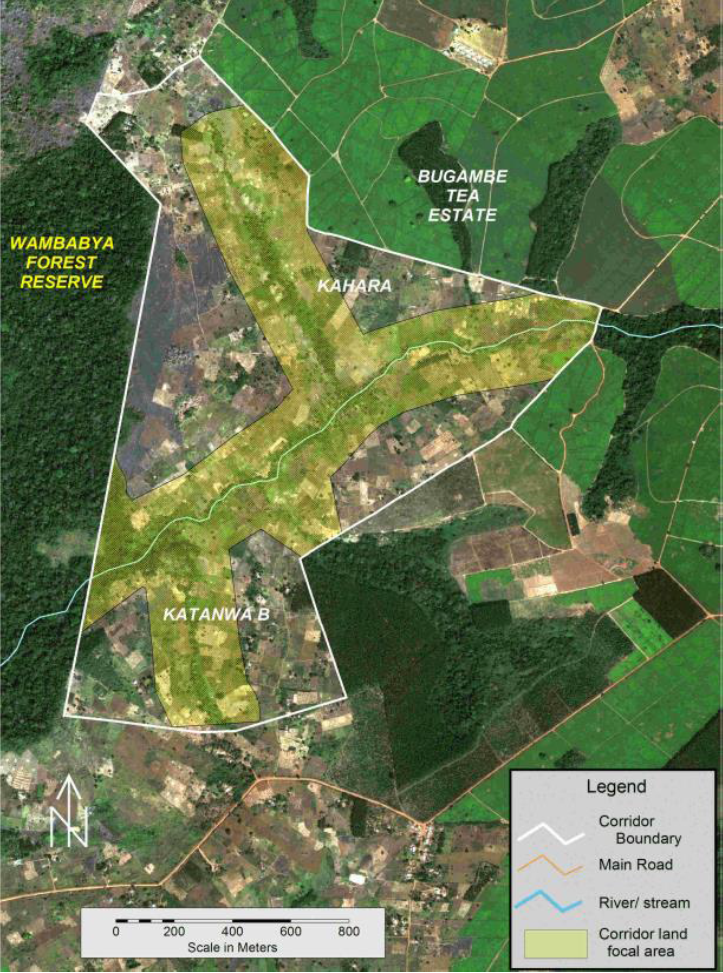 The project targets to work with Multiple land holders constituting the 600ha identified for restoration in Phase 1 – in the Bugoma-Wambabya-Bujawe connectivity linkages for the Bugoma-Budongo wildlife corridor in Kikuube District of the Murchison landscape in the Albertine Rift of Western Uganda. The target is to secure the land tenure in the two linkages and reforest the area completely by planting 240,000 plant trees as part of an incentivised corridor restoration programme.

The Project will work with Public institutions including the National Forestry Authority (NFA) and the District Local government specifically, the District Forest Services (DFS) and District Land Office. The targeted holders include licensed individuals and private forest owners; key institutions like churches and schools and hospitals; cultural institutions and sites; communally available holdings; and any other spaces that will be identified by working closely with local councils at district and subdistrict levels.

Securing land tenure will include outright purchase and leasing from as well as conservation easements with willing holders.

Land holders owning the 1800ha of land that will be reforested with 720,000 trees over 3 years in 3 phases; and participating in a sustainability strategy based on payments for environmental services scheme, in the 3 corridor districts of Kikuube, Hoima and Masindi in Western Uganda; and a more climate resilient landscape and livelihoods for the 1,034,600 million residents of the 3 districts. . Uganda, especially Public institutions (NFA, Local Govt) and the global community will benefit from the conservation of globally significant biodiversity.

Various stakeholders will be involved at different levels of the project. World Land Trust will finance the project; and ECOTRUST will be the lead implementing agency. The World Land Trust is a conservation charity which protects the world’s most biologically Important and threatened habitats acre by acre. ECOTRUST will engage collaborating partners at the various levels to ensure successful project implementation. 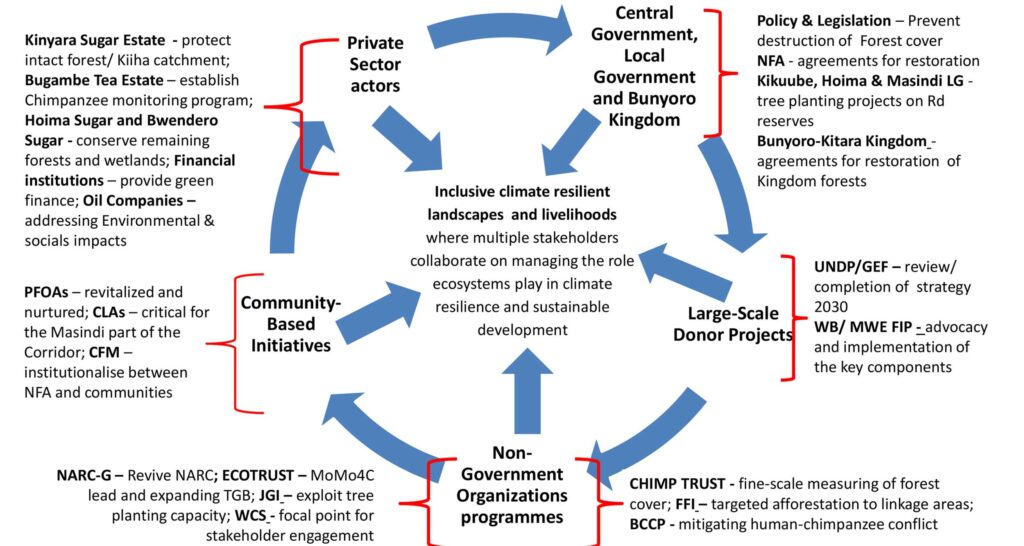 The human population in the area is increasing at 6.7% per annum (Kitobazone).  Across the landscape, population density has increased to the point where virtually all land is now needed for agriculture to sustain the household.  Land holdings now stand at 2.3 ha HH. By 2025 it will have reduced to 1.7 ha HH.  By this stage all HHs will not have any land left for indigenous forest.

Commercial sugar and maize cultivation is expanding over large areas of the Corridor. Within the Corridor, Hoima Sugar and BwenderoSugar are expanding rapidly through land leases with outgrowers.   The rate of increase is approximately 800 ha annum.  East of the corridor, the KinyaraSugar Estate is expanding its outgrowerbase southwards and westwards over the next 5 years;. This will increase the area under cane from 28,000 ha to about 42,000 ha.

Indigenous forests on private land do not produce fuel wood at a rate sufficient to sustain households.  Whilst expansion of woodlots takes the pressure off remaining forest, in fact the forest is being cut down and replaced by fast-growing fuel wood exotics.  The rate of increase of plantation forestry is 400 % annually

Within the major forest blocks of Bugoma and Budongo, forest cover has remained stable over the last 10 years.  Wambabyais also stable, but greatly threatened by the immediate proximity of Hoima International Airport, which is contiguous with the border of the FR and occupies a similar overall area.  BujaweFR was settled and deforested in the 1990s.  Many settlers have been evicted, but a significant number remain.  There have been no efforts to restore natural forest cover.   Within MukihaniFR, some 77% of forest was removed between 2011 and 2018.  There is almost no natural forest cover remaining

In the lead-up to oil development and production, the major transport and infrastructural highways within the corridor are being widened and tarmacked.  There is a huge increase in the number of people settling along these new highways.  Three roads, from Hoima to Kaiso, Hoima to Biiso and Kizaranfumbi to Airport / Refinery cut directly across the corridor. The Refinery road will also serve as the routing for the oil export pipeline from the Refinery to Tanzania.  These highways represent a major barrier to primates and other species moving within the corridor.

In partnership with IUCN Committee of The Netherlands, ECOTRUST has embarked on a process of developing a detailed plan for re-establishing critical linkages within the Northern Albertine Rift Forest Corridor.